by Morgan True vtdigger.org The Roman Catholic Diocese of Burlington lost at least $1.5 million and perhaps as much as $2 million on a $3.65 million loan to Burlington College, according to financial statements from the church. In 2010, Burlington College bought the former diocese headquarters on North Avenue for $10 million. The diocese sold the property to help cover the cost of a $17 million settlement with victims of priest sex abuse in Vermont. The college borrowed heavily to buy the 33-acre prime Lake Champlain waterfront property. The purchase was part of an ambitious expansion plan for the school, led by Jane Sanders, the former Burlington College president and the wife of presidential candidate Sen. Bernie Sanders. In August 2011, Jane Sanders resigned as doubts emerged about her plans and fundraising strategy. The college trustees gave her a $200,000 early exit package.

The diocese loan was settled earlier this year, and recently released documents show the diocese lost $1 million in principal payments, plus $500,000 to $1 million in interest accrued but never paid over a five-year period.

Sanders declined to be interviewed for this and previous stories about the loans.

To avoid bankruptcy, the college sold 27 acres to developer Eric Farrell in February for $7 million. At about the same time, Burlington College settled the loan with the diocese.

Farrell plans to build more than 700 units of housing on 15 acres of the property. As part of the deal, the Champlain Housing Trust and other partners will build 160 units of affordable housing. The college will retain a 6-acre parcel.

The development, which includes a 12-acre park, was approved by the Burlington City Council Monday night. Many residents laud the deal for striking a balance between the city’s need for affordable housing and open public space, but a vocal contingent decry the deal as a giveaway to a wealthy developer.

The diocese takes a haircut

Arriving at a precise figure for the amount the Roman Catholic Diocese lost is difficult because Farrell, church officials and Burlington College officials refuse to discuss how the loan was settled.

The church and the college declined multiple interview requests, and neither would answer a set of written questions about how the loan was discharged.

“They probably refused to talk to you about it, because it’s none of your business,” Farrell said. He, too, declined to provide details of how the debt was settled.

Here’s what the documents show: The Roman Catholic Diocese of Burlington lost $996,000 of the $3.65 million principal on the loan it made to Burlington College. 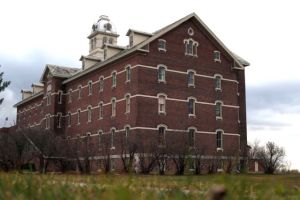 Burlington College, and the former headquarters of the Roman Catholic Diocese of Burlington. Photo by Phoebe Sheehan

There is also no evidence that the diocese received any interest payments during the five-year life of the loan. Depending on who had prevailed in a disagreement between the diocese and Burlington College over whether the loan went into default, the unpaid interest totaled between $593,000 and $923,000.

If a default occurred, the total loss to the church, principal plus interest, would be just shy of $2 million. If a default did not occur, the loss would be a little more than $1.5 million.

Burlington College paid the diocese $542,000 prior to June 2014, reducing the amount the church was owed to $3.1 million. Then sometime prior to June 2015, the loan was settled for a $1.05 million cash payment and a $1 million investment in an unidentified company.

The $1 million investment represents a 16.7 percent stake in that company. The audit states that the diocese plans to exercise a “put option” in February 2016, meaning they will cash out for the agreed upon $1 million. Returns on the investment so far totaled $60,822 as of a June 2015 diocese audit, the most recent financial information available from the church.

While it appears the diocese plans to request the $1 million owed, “that doesn’t mean the company has the cash to pay if off,” said Don Keelan, a CPA who helped VTDigger analyze the financial statements.

Keelan said the investment is “certainly at risk.” If the diocese can’t collect, “that loss (on the principle) of $996,000 could be a lot greater.”

“When you step back from it all, here the (diocese) had a note from the college where a good portion didn’t materialize, and now the note was converted into another instrument, an investment in an LLC. That’s not very liquid,” Keelan said.

“The diocese should be getting their money, that’s what they need, not putting themselves in a speculative position. It goes to show how desperate the diocese was to collect on this,” Keelan said.

Burlington College and the diocese both refused to name the company the diocese now partially owns. In a statement, Burlington College officials said, “Any questions about the details of the financing that EF Farrell, LLC utilized to purchase the property should be directed to Eric Farrell.”

In November 2014, Seven Days reported that it had obtained a document detailing a “proposed transaction between the diocese and Farrell.”

According to Seven Days, the deal Farrell proposed involved the church forgiving $2 million of the Burlington College debt and accepting a $1.5 million investment in the company Farrell created to build his planned housing development.

Farrell declined to say if the diocese owns a stake in the housing project, noting that it’s not a matter of public record. “I have a group of investors who joined me in that company, and I don’t think it’s appropriate to say who they are,” he said. 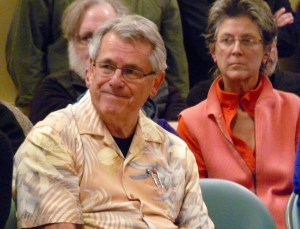 Developer Eric Farrell at a Dec. 21 City Council meeting where a development deal he reached with the city was approved by councilors. Photo by Morgan True / VTDigger

If the diocese owns a stake in Farrell’s project, that $1 million investment may never materialize. As City Councilor Tom Ayers told residents in an attempt to placate those who feel the city’s deal with Farrell was reached behind closed doors and without sufficient public input — a point Ayers contested — the public process “is just beginning.”

In order for the developers to move forward, the project must get environmental approval through the Act 250 process, approval from the city’s Development Review Board and other city boards and commissions. It also needs zoning changes related to height and density approval. All of the processes will provide opportunity for public involvement, Ayers said.

If Farrell is unsuccessful overcoming the regulatory hurdles, the loss to the church could be greater. The church also has an option to cash out their stake this February, provided Farrell has the money.

At the same time, Keelan acknowledged that if Farrell did partially pay the diocese with an investment in the housing project, it would have reduced the amount of cash he needed at the closing with Burlington College.

That means Farrell may have only paid $6 million in cash at closing for a $7 million purchase price on a property that the City of Burlington valued at nearly $20 million in 2010.

The original note had an interest rate of 3.6 percent. Interest payments for the first 18 months of the loan were deferred and would have been forgiven if the $3.65 million principal was paid before December 2014. It was not.

Starting in July 2012, Burlington College was to begin making monthly principal and interest payments of $36,265, which it did not make. As a result, the diocese served Burlington College with a notice of default in August 2012, and began charging an 8 percent “penalty interest rate” stipulated in the loan.

The college disputed the loan was in default. The college audit states that payments to the diocese were contingent on whether the college had at least $1.45 million in the bank prior to making each payment.

The college was unable to make principal or interest payments because it hadn’t banked that amount, according to the audit. The diocese sought to impose the higher interest rate, which it says would have resulted in the college owing $140,000 more in interest as of June, 30, 2013.

“The ultimate resolution of this matter is unknown,” the Burlington College audit states.

With the penalty rate being applied from August 2012 to when the loan was settled earlier this year, the uncollected interest would total $923,000. Without the penalty interest, the interest owed to the church would be $592,000.

Though unwilling to answer questions about how the Burlington College loan was settled, Martin Hoak, the diocese CFO, provided a statement disputing that the Roman Catholic Diocese lost money in the deal.

The CFO says an independent appraiser the church hired assessed the 33-acre, lakefront property with several historic buildings, including a 19th century orphanage, for $6 million, $4 million less than what the college paid.

“Therefore, all funds received above that amount are a premium, and any amounts not collected on the loan reduces our premium, but are not a loss,” he said. Hoak did not respond to VTDigger’s request for a copy of the appraisal.

“In 50 years of doing this I’ve never seen such a claim,” he said. “They didn’t get the principal back, and they didn’t get any interest payments, so they had to book a loss.”