Burlington is best city in the nation for dentists

Burlington is best city in the nation for dentists

Vermont Business Magazine A new study that AdvisorSmith released on the “Best Cities for Dentists” ranked Burlington  as the #1 best midsize city for dentists and overall the best city in the US. The study analyzed data from 258 cities and examined dentist’s salaries, the number of jobs, and the cost of living in each city. They categorized the data by city size to find the top 10 best small, midsize, and large cities.

Thirty-six of the top 50 best cities for dentists were small or midsize cities. Different people have various preferences for living environments so our study broke down the cities into different sizes based on population. In the table below, we list the top 10 small (population under 150,000), midsize (population of 150,000-500,000), and large (greater than 500,000 population) cities for dentists.

Thirty-six of the top 50 best cities for dentists were small or midsize cities. Different people have various preferences for living environments so our study broke down the cities into different sizes based on population. In the table below, we list the top 10 small (population under 150,000), midsize (population of 150,000-500,000), and large (greater than 500,000 population) cities for dentists. 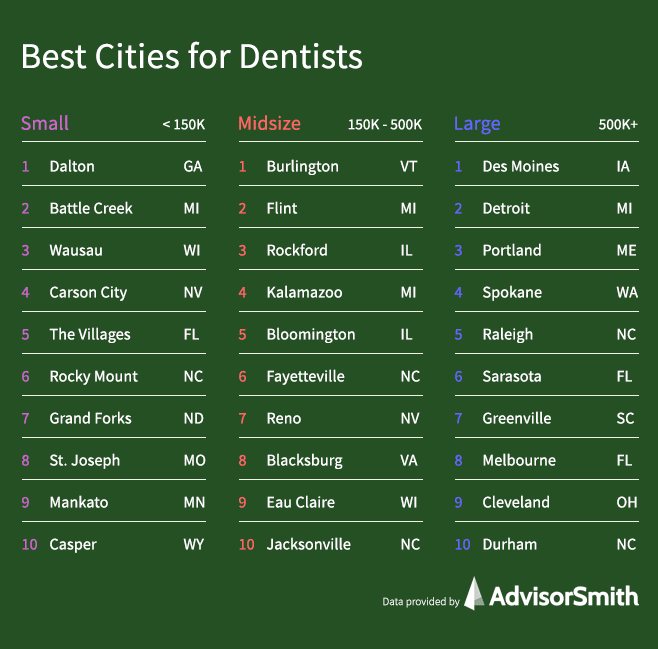 Dentists in Burlington made an average salary of $275,430, and the cost of living is 6.9% percent below the national average. In addition, there are 2.75 times as many dentists in the area compared to the national average, which provides dentists a welcoming community of professionals in their own industry to interact with.

Flint is one of the top midsize cities in our study and is located northwest of Detroit, Michigan. From the late 19th century to the mid 20th century, Flint became a powerhouse in the automobile industry, being home to companies such as General Motors, which was founded in the city in 1908. Flint hosts two major medical centers: Hurley Medical Center and McLaren Regional Medical Center.

Dalton is the top small city in our study and is located in Northwest Georgia. The city is referred to as the carpet capital in the world due to the sheer amount of floor-covering manufacturers in the area. In 2011, carpet mills began cutting back productivity and closed facilities, which caused Dalton to diversify its economic sectors. Although factory jobs still play a significant role in Dalton’s economy, the health care industry has become a large employer in the city. Dental clinics populate the city and the Hamilton Health Care System is a key employer in the area.

Located on the banks of the Rock River in northern Illinois, Rockford is a midsize city in Winnebago County. Due to the city’s position along the Rock River, Rockford became a center for industrial development. In the 19th and 20th century, the city became known for its output of heavy machinery, hardware, tools, and furniture. Rockford experienced industrial decline in the latter half of the 20th century, but in the late 1990s, economic diversification led to the growth of automotive, aerospace, and health care industries. The largest employers in Rockford include Mercy Health, Swedish American Health System, and OSF HealthCare.

Kalamazoo is a city in the southwestern region of Michigan. Kalamazoo was once known as the “Paper City” due to the abundant number of paper mills in the city during the late 1960s. As employment opportunities in paper mills decreased due to the closing of these facilities, the area’s economy diversified into various sectors of business: life sciences, health care, manufacturing, breweries, and industrial design. Kalamazoo is home to Western Michigan University’s Homer Stryker M.D. School of Medicine and a variety of hospitals such as the Bronson Medical Center. The city’s strong background in health care provides dentists with a supportive environment to practice their profession.

AdvisorSmith’s analysis includes various components in determining the best cities for dentists to practice their profession. This study was based upon data from the U.S. Census Bureau’s Bureau of Labor Statistics, Occupational Employment Statistics data. The data was examined at the metropolitan statistical area level (MSA) level, which we call “cities.” We used MSA-level data because dentists often commute to work from a different part of the metropolitan area than where they live, so using MSA-level data captures the economic integration of neighboring cities in a region.

1. Cost of living index for each city

In our analysis, we adjusted the salaries earned by dentists in each city by a cost of living index. Cities that were ranked more highly in this analysis were those that had a lower cost of living. The cost of living was based on AdvisorSmith’s City Cost of Living Index, which measures numerous factors such as the cost of housing, transportation, food, health care, and other factors at the MSA level, which impact the amount of purchasing power that a dentist has.

The study utilized average annual salaries that dentists earn in each city. Cities that offered higher salaries were ranked higher in our analysis. The median pay for dentists in 2019 is $159,200.

3. Density of jobs for dentists in each city

In our study, we examined the location quotient, which represents the number of jobs available to dentists, relative to the national average. Cities with a higher location quotient have a higher concentration of jobs for dentists, which means more career opportunities and more demand for dentists in those cities. According to the U.S. Bureau of Labor Statistics, there were 110,730 dentists employed in 2018. Also, they predict that the overall employment of dentists is projected to grow from 7% from 2018 to 2028, faster than the average for all occupations.